As its labor cost is equal and even higher than other countries, Vietnam will have to replace the cheap labor advantage for the skilled workforce advantage in the coming time to raise the competitiveness. 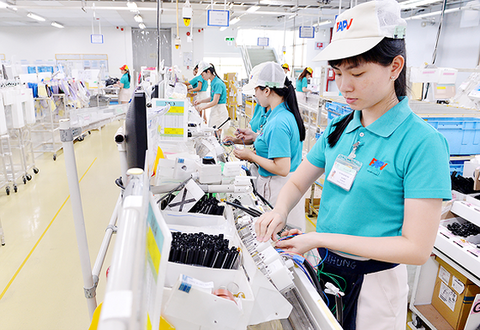 Vietnam’s low labor cost appeal to foreign investors is facing decline due to a rapid rise in minimum wages across the country, experts warned.

According to reports from global financial information services provider Fitch Group, Vietnam was among three countries in East and South East Asia that saw the largest year-on-year average minimum wage growth rates between 2015 and 2019 with 8.8 per cent, just behind Laos and China with of 14.6 per cent and 9.8 per cent, respectively.

The 2019 minimum wage in Vietnam also increased by an average of 5.3 per cent across the country’s four regions, of which Region 1 (covering the urban areas of Hanoi and Ho Chi Minh City) saw the largest increase in the minimum wage - 5.9 per cent - to US$180.

Fitch’s analysts forecast the average nominal minimum wage to continue rising across East and South East Asia, including Vietnam, over the short-to-medium term, underpinned by the region’s transition into high-value manufacturing and service-based economies associated with higher labor costs, while moving away from agriculture and low-cost labor-intensive sectors, which generally have lower wages.

“This, together with robust economic growth and the rising costs of living, risks exacerbating regional wealth inequality, thereby emboldening workers’ demands for higher minimum wages,” Fitch analysts noted, adding authorities in some countries, including Vietnam, are succumbing to worker and union demands in order to prevent possible outbreaks of social unrest that could cause political instability.

In fact, the availability of large pools of low-cost labor has positioned Vietnam as the premier hub for labor-intensive business operations, particularly in manufacturing. Many big foreign manufacturers, such as Samsung, LG, Intel, Nike and Adidas, have chosen Vietnam as their destination due to the country’s low labor costs.

Therefore, as its labor cost is equal and even higher than other countries, Vietnam will have to replace the cheap labor advantage for the skilled workforce advantage in the coming time to raise the competitiveness, experts said.

Nihad Ahmed, senior economist at global provider of economic analysis and forecasts Focus Economics, said that one of Vietnam's weaknesses is the lack of skilled workers, emphasizing that Vietnam is far behind China, Singapore, Malaysia and Thailand in this field while developing a highly skilled workforce is critical to attracting FDI into value-added industries.

To remove the shortcoming, the Vietnamese government is formulating a new national FDI attraction strategy for 2018-2030, in which the development of skilled workforce will be one of the top priorities.

Wim Douw, senior private sector specialist of World Bank’s International Finance Corporation, also highlighted some proposals to serve as key inputs for the Vietnamese government to devise the new strategy. Among them, he suggested Vietnam should create and implement an integrated national skills development plan to accelerate the country’s transition from low skilled to highly qualified labor, which will facilitate technology transfer from foreign invested enterprises.

Head of the Delegation of the European Union to Vietnam Bruno Angelet also said that a human resources with high technical expertise are the important factor that European investors require.

Besides bringing in opportunities of jobs with high income and international standard working environment, a skilled workforce will help Vietnam learn governance skills and get technology transfer, Angelet said, adding however, this is a challenge for Vietnam's education system in meeting the demand for human resources.