The ongoing coronavirus outbreaks are now threatening to bring the timber industry to its knees, with businesses and associations hoping for preferential vaccine treatment and financial support for test kits and other pandemic-related expenses. 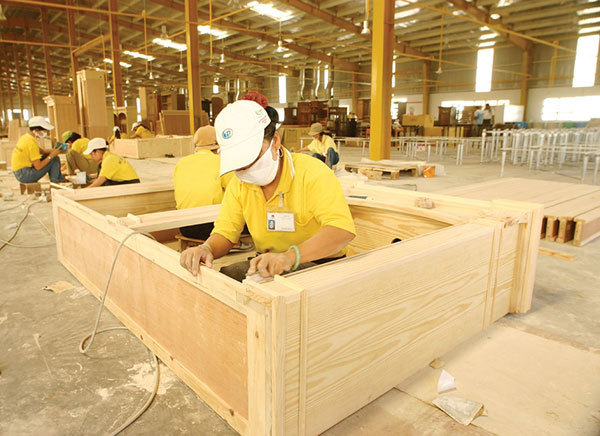 At more than half of the companies in the four furniture production centres of Vietnam that contribute over 70 per cent to the nation’s export value of timber products, production has been suspended as several cases of COVID-19 infections appeared, further extending delivery schedules for overseas buyers.

Long Viet Co., Ltd., a wood supplier in the southern province of Binh Duong, halted production last week when its 248 workers were found positive for coronavirus. Bui Nhu Viet, general director of Long Viet, told VIR, “The company suffered great damage from the pandemic. We had to suspend production and could not continue with the stay-at-work model.”

Viet worries that the now-broken supply chain will cause consequences, with workers losing their jobs as the virus continues to spread. Long Viet’s final attempts at contract renegotiation yielded mixed results.

“Many buyers sympathise with us and hope we return to production soon, but there are also many buyers who do not accept the situation and cancel orders,” Viet said. “Overseas buyers are often precise with timetables. They are concerned about the Vietnamese government’s control of the pandemic and when suppliers will return to normal production.”

Many manufacturers are now rethinking the stay-at-work model after the Long Viet incident. Tien Dat Wood JSC in the south-central province of Binh Dinh is under additional pressure after its main supplier Long Viet stopped production. The lack of kitchen cabinet components may cause Tien Dat – one of the largest suppliers of timber products to the US and European markets – to fail deliver on time under its contracts.

Tran Quoc Cuong, deputy director of Tien Dat, said that the company’s capacity has decreased by 30 per cent because its one factory is located in a locked down area. Tien Dat is also short of workers, because in addition to the ones under quarantine, a very large number of workers has returned to their hometowns when the new infections appeared. Meanwhile, the cost for the stay-at-work model increased overall costs by about 30 per cent compared to the first quarter.

The wood industry recovered quickly after the previous outbreaks. Most businesses received many orders for several months. However, the current outbreak caused a sharp decrease in production capacity, with some companies reducing their output from five to just one container per month.

Nguyen Phuc, vice chairman of the Binh Duong Furniture Association said, “Buyers are not happy, but most of them accept renegotiating contracts.”

According to Phuc, renegotiations have two possibilities. Firstly, buyers will wait for Vietnamese manufacturers to reproduce, in the hope that the source of goods will be guaranteed. This only happens in case the buyer has a certain amount of stock.

With the second option, buyers turn to manufacturers with factories in China to produce items that were once made in this country. However, it will be very difficult for buyers to buy from China or another country if they have not had any connection before. Going down this road would require transferring samples, building up products, and trial production, all of which can take a few months.

“Thus, the first option is much more likely. Before making a decision, buyers will consider how long the recovery of production in Vietnam will take. Buyers will not penalise contracts because of the pandemic and many show goodwill,” Phuc said.

Timber and its products are a commodity with high export value, with 65 per cent coming from Dong Nai, and Binh Duong provinces, and Ho Chi Minh City.

In the first six months of 2021, Vietnam’s wooden product export value was estimated at $8.1 billion, up more than 61 per cent over the same period in 2020 according to the Import-Export Department under the Ministry of Industry and Trade.

However, the current outbreak has pushed the wood industry into stagnation. The results of a quick survey of wood associations showed that the production stoppage is spreading throughout the four largest wood processing centres in Vietnam.

In Binh Duong, 29 out of 100 companies participating in the survey closed, while in Dong Nai, 30 out of 50 companies stopped production. Meanwhile, in Ho Chi Minh City and Binh Dinh, many large companies were forced to stop production in some factories.

Do Xuan Lap, chairman of the Vietnam Timber and Forest Product Association (VIFORES), said businesses cannot produce if they are completely isolated from society, because they have to import raw materials, export finished products, and receive food.

Meanwhile, COVID-19 test methods still show errors despite ensuring all employees that participate in the stay-at-work model are negative each week and the implementation of random daily tests.

The pressure to maintain supply from Vietnam weighs heavily on the wood industry. Lap said that VIFORES last week agreed to ask the prime minister and members of the government to consider distributing vaccines to the more than 700,000 timber workers. Back in May, VIFORES also sent a document to the prime minister requesting to buy one million doses of vaccines to ensure production and supply chain are not interrupted.