Vietnam sees wood and wood works as a spearhead industry, earning export revenues of $18-20 billion by 2025. 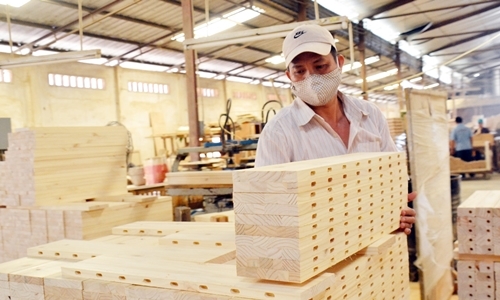 Listing challenges facing the industry, the conference heard that wood logged from local plantations was of low quality because the trees were young, while material imports were getting thinner as many countries tightened export controls to limit deforestation.

Vietnam imports about 20-21 percent of wood materials it needs for local production.

Vietnam annually ships 8 million tons of wood chips, mainly to China and Japan, for pulp production, according to the Vietnam Timber and Forest Product Association.

The demand for woodwork products in the domestic and international markets has been increasing in recent years due to rapid urbanization and potential recovery of the local real estate market, according to the Vietnam Administration of Forestry.

Vietnam, the world’s 5th biggest wood exporter, earned $4.8 billion from exporting woodwork products in the first seven months of this year, a year-on-year increase of 13.4 percent, according to the General Statistics Office.

Its major export markets include the U.S., Japan, China and the European Union. Vietnam’s exports account for six percent of the global timber and wooden furniture market which is estimated at $120 billion.

It now is home to nearly 4,000 wood processing enterprises, mainly in the southern region, of which around 1,500 specialize in making products for export.